It’s been two years, I think, since I last watch Takuya Kimura’s series. Actually the newest series of him is called A Life where he (finally) become a doctor! However, I really want to talk about this series made in 2012, called “Priceless”, because I really like the idea and of course the message of this masterpiece. I will write the review of his newest series later, by the way. 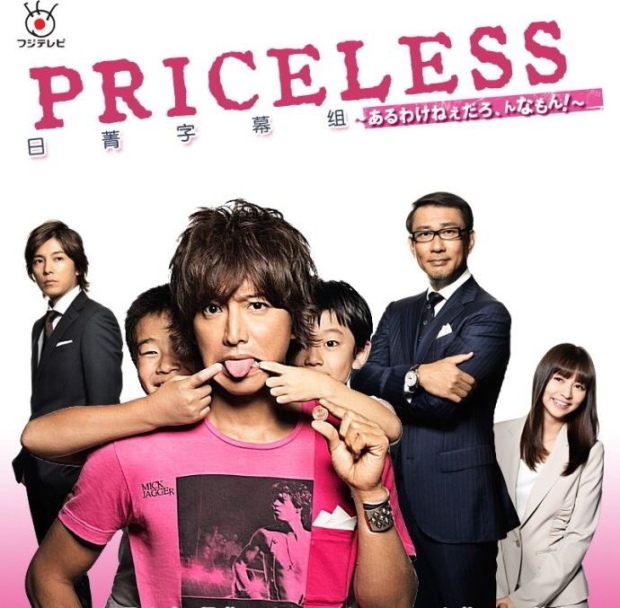 Priceless is about how a man, Fumio Kindaichi (played by Takuya Kimura) who worked at a home appliances company (mostly thermos) suddenly get fired. He was a typical of carefree salaryman who doesn’t really think about his future, only think for his present, and living his life at the present. He was rather ignorant with his own life and his surroundings, although he could sense what other’s feel but he takes his ability for his own benefit. The 180 degrees change in his life have pushed him to start thinking and seeing the life from a different perspective. The view which he neglected for all this time. To appreciate his surroundings. To appreciate the hard work and money. But the point is, to appreciate what’s more important than money, that money can’t buy in life.

Takuya Kimura, as usual, played very well. He nailed the character as the cool guy (of course). Moreover, his natural charming aura has elevated the character of Fumio Kindaichi waaay to the next level! The other characters were also attractive, I love the team of three (Fumio Kindaichi, Kengo Moai and Saya Nikado) because their chemistry are just so cute.

What I love about the series is that it taught me how to survive and how to not be afraid to start all over again, even from the scratch. Because sometimes, we never know that God’s help actually are around us. We just need to be sensitive and care about our surroundings. There were moments when the help comes unexpectedly. And it is really really important to keep the optimistic attitude in our mind. From this story I also learn that sometimes we have to go to the rockbottom to learn what we have to learn. It hurts. It is scary. But it will be worth for our life.

The character of Fumio Kindaichi is actually very carefree. He did what he thought he should, even though we might think that he’s not reasonable. He is also sensitive for other’s feel. He is the type of my “dreamy” boss. Because he approached everyone personally. He become to thinks about others first before himself. He carries a typical of startup founder’s attribute who doesn’t stop facing many obstacles because of he believes. I love the message of how one cannot achieve success by his own. One needs a really a good team, the partners who believe at him/her and will do everything to support each other’s back.

It is also interesting because the script writer explain why it has to be thermos that they sell. The one which actually we might think is less useful in modern era. It turned out that the founder of the company has his own reason and his own story with the thermos. I like the small details and insignificant significant story behind the thermos. The fact that we almost forgot but actually has its own unique function and history.

All in all, I consider this series as a fairytale because many events in this drama actually don’t make sense and can’t relate in our real life. But still, the spirit and the message of this drama can be adopted in our real life. I personally inspired of this series to take a very very big decision last year. A decision that not everyone can agree or accept, but turns out for me it was a leap of faith. I think this one good for you to watch when you need a support in your downside. Plus, again, Takuya Kimura san is very charming here!